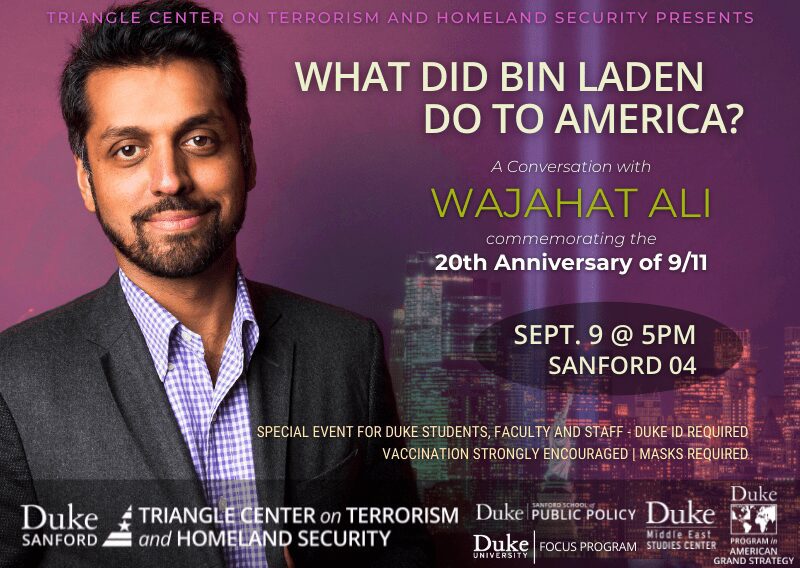 This is a special in-person event for Duke students, faculty and staff. Pursuant to Duke policy, vaccination is strongly encouraged and masks are required.

If not attending in person, register for the webinar livestream: https://duke.zoom.us/webinar/register/WN_4gzkBpIlQi2HigAc1msXXw

To commemorate the 20th anniversary of 9/11, Professor David Schanzer will welcome Wajahat Ali, an influential writer and one of the leading Muslim American public intellectuals, to discuss the impacts of 9/11 on the United States and the world. The discussion will cover social and cultural impacts of 9/11 on America and political discourse, as well as how 9/11 has been experienced by Muslims and other people of color. Ali is a keen observer of American politics and will provide insights into how 9/11 intersects with the current state of American democracy and the ongoing tensions relating to identity, race & ethnicity, and American nationalism.

WAJAHAT ALI is a New York Times op-ed contributor, a lawyer, a playwright, and a former TV host. Recently, he was creative director of Affinis Labs, working with Facebook and Google on social entrepreneurship initiatives that have a positive impact for marginalized communities. He co-hosted Al Jazeera America’s daily news show “The Stream” and is the author of the award-winning play The Domestic Crusaders. He is the lead author and researcher of the investigative report Fear Inc.: The Roots of the Islamophobia Network in America published by Center for American Progress.He is also a Peabody-nominated producer for the series “The Secret Life of Muslims.” In 2012, Ali worked with the U.S. Department of State to design and implement the “Generation Change” leadership program to empower young social entrepreneurs. He initiated chapters in eight countries, including Pakistan and Singapore. He was honored as a “Generation Change Leader” by Sec. of State Clinton as an “Emerging Muslim American Artist” by the Muslim Public Affairs Council. Ali has given many presentations, from Google to the United Nations to Princeton to The Abu Dhabi Book Festival. His writing has appeared in The New York Times, the Atlantic, the Washington Post, the Guardian, and Salon. He regularly appears on CNN to discuss politics and current affairs.

To receive updates on the Triangle Centers’ activities, invitations to events, and other information that may be of interest, click here.